Meet the New "Voice of the Tigers" 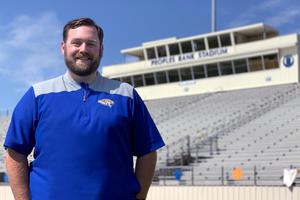 Frenship Football named Keith Patrick the new "Voice of the Tigers." Patrick is new to this role, but not new to the District.

Patrick has served as Frenship’s Director of Entrepreneurship & Innovation since 2015. As part of his role, he is known as an engaging public speaker both internally to Frenship staff and in the community to civic groups through presentations and leadership training. Patrick can often be seen representing Frenship ISD on camera for local news broadcasts as they cover the many programs he builds and supports across the District.

“Working daily with students, teachers, and coaches provides me great perspective about the lessons learned through competition,” explained Patrick. “Whether it’s athletics, academic, or fine arts, the dedication and work ethic that comes from the passion students pour into their preparation will serve them far into their futures. The lessons of disappointment, teamwork, and goalsetting are immeasurably valuable as well.”

As part of his broad service and volunteer activities in the community, Patrick also often represents local organizations on television and radio including the Cattle Baron’s Ball of Lubbock. A Past Chair, current Entertainment Chair, and the 2019 recipient of the Cattle Barons Ball’s Silver Stirrup Volunteer award, Patrick has appeared on local television and radio regularly for several years discussing that major fundraising event and their annual big-name country headliner.

Patrick has also served as the color analyst for Frenship Baseball broadcasts for two seasons and provided in-game and halftime stat reports for two seasons of Frenship Football as well. Additionally, as an avid Texas Tech Baseball fan, he can often be heard on various local radio programs and national podcasts discussing the Red Raider Baseball team.

A lifelong sports fan, Keith has found a love for Frenship Athletics and the role sports and all competition plays in the development of young people.

“I love being a part of bringing the action to those family members and fans who can’t make it to every game. It not only connects them more closely to the students, but it also helps tighten the bonds that tie Frenship ISD together and make it such a special place. I’m incredibly honored to be a part of the Frenship family and I couldn’t be more thrilled for the opportunity to be the Voice of the Tigers and follow in the footsteps of some incredible broadcasters.”